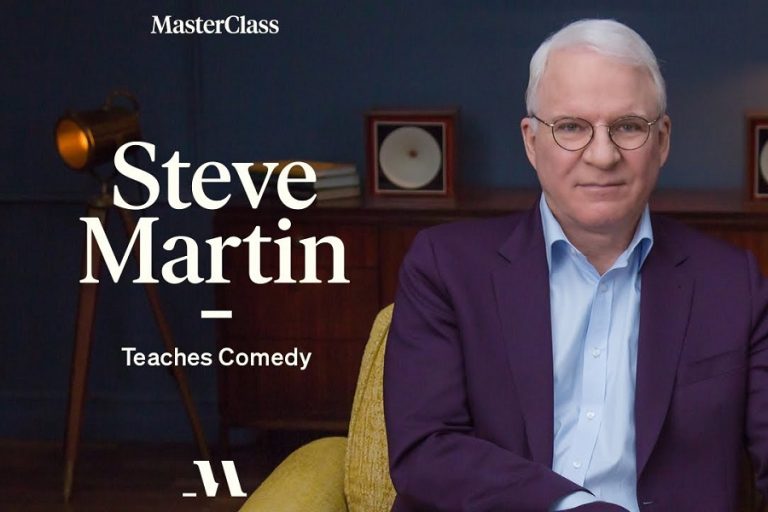 The best comics in the industry seem to make comedy seem like such an easy thing to do. But in reality, it takes a ton of work to become a successful comic or to have a successful career in comedy. Successful comedy requires several factors, like wit, charm, originality, and timing—and that’s just scratching the surface.

But if you ask Steve Martin, one of the most successful comics in history, he’ll tell you that one factor supersedes all others when it comes to comedy—confidence. You’ll learn more about that all-important factor in this MasterClass, where Steve Martin teaches comedy.

If you’re looking to up your comedy game by taking this MasterClass, or wondering if there’s a chance you can achieve your dreams as a comedian, this Steve Martin MasterClass Review is for you.

MasterClass is an online education platform that offers classes taught by world-renowned instructors. Steve Martin is one of the platform’s highly respected instructors and teaches a course on comedy.

MasterClass is unique in that it allows users to learn from some of the best instructors in the world. In addition to Steve Martin, other instructors include chefs Gordon Ramsay and Wolfgang Puck, fashion designer Marc Jacobs, photographer Annie Leibovitz, and many more. With such a diverse range of instructors, MasterClass has something to offer everyone.

Whether you’re looking to improve your comedy skills, cooking skills, or expand your knowledge of fashion, MasterClass is the perfect place to start.

Who is Steve Martin?

Steve Martin is a comedian, actor, writer, and producer who has succeeded in multiple areas of the entertainment industry. Born in 1945, he began his career as a writer for The Smothers Brothers Comedy Hour.

He soon began appearing on the show as a performer, and his talent for physical comedy quickly became evident. In the 1970s, he transitioned into film, appearing in several popular comedies, including The Jerk and The Steve Martin Brothers.

He also began writing comedy and starring in his own movies, such as Dead Men Don’t Wear Plaid and Roxanne. And who can forget some of his iconic performances in Father of the Bride (1991), All of Me (1984), and the star-studded 2009 movie, It’s Complicated? In addition to his work in film, Steve has also had a successful career as a musician, releasing several Grammy-winning bluegrass albums.

In recent years, he has returned to his roots in standup comedy, touring extensively throughout the United States. Martin is a unique talent who has enjoyed a long and successful career in multiple areas of the entertainment industry.

Steve Martin is one of the most successful comedians of all time. His career has spanned over five decades, and his accomplishments are numerous. He has won multiple Grammy Awards, an Emmy Award, and a Golden Globe Award. He is also an accomplished author, musician, and actor.

In addition to his many achievements, Steve Martin is a highly respected comedy teacher. His experience, expertise, and comedic brilliance make him the perfect choice to teach a MasterClass of comedy.

Steve Martin’s comedy MasterClass will cover everything from writing jokes to performing standup comedy. Students will learn from one of the best in the business and come away with a new appreciation for the art of comedy.

With over 50 years of comedy experience, Steve Martin’s MasterClass shares his tools of the trade and he discusses some key points that have helped him advance his career as a comedian.

You could say that Steve Martin’s general career is a thorough list of what one needs to experience to be an all-around comic. From writing scripts to performing live on stage, on TV, and in film, his experience is vast. And he brings this knowledge to his MasterClass.

The entire course spans over 25 videos and is approximately 4.6 hours of content. This particular course has more videos than many other courses on MasterClass.

Aside from the video lessons, you’ll also get to work on a 74-page workbook, an excerpt from the Meteor Shower’s Script, and a full script from Roxanne. These latter two materials play a vital role in Steve Martin’s MasterClass.

His MasterClass has five main parts:

In the first section of this Steve Martin MasterClass, Martin speaks about his early career as a writer for The Smothers Brothers Comedy Hour. He discusses how he transitioned into standup comedy and shares some of his earliest jokes.

The second part is all about writing jokes. Steve Martin discusses how to come up with a premise, brainstorm ideas, and find the punchline. He also shares some of his jokes as examples. This section includes a helpful exercise where students write their jokes using the provided premises.

The third part is all about performing comedy. Steve Martin introduces the importance of confidence, delivery, and timing. He also shares some of his performance tips and tricks. It includes a helpful exercise where students perform a standup routine in front of a mirror. Martin also tackles how to find your comedic voice and stand out.

The fourth section is all about directing comedy. Steve Martin discusses the process of creating a comic scene, from brainstorming ideas to shooting the final product. He also shares some of his directorial tips and tricks. Here, there’s a helpful exercise where students are asked to direct a short comic scene.

The fifth and final part is all about career advice. Steve Martin talks about the importance of networking, perseverance, and self-belief. He also shares some of his own career advice and tips. This section includes a helpful exercise where students are asked to create a comedy reel.

On top of this, Steve Martin gives some bonus footage from speeches and live events and dissects them. He offers substantial insight as to his thought process during his speaking opportunities. There’s absolutely no shortage of learning material in this MasterClass.

To summarize, here are some of the major takeaways from this MasterClass:

Who is this Class For?

The Steve Martin Masterclass may suit the following types of audiences

How Much Does Steve Martin’s MasterClass Cost?

You can only access Steve Martin’s Masterclass through an annual all-access pass on MasterClass. With your subscription, you’ll get access to 150+ MasterClass lessons. The cost varies, depending on how many individuals will use the subscription.

An individual all-access pass is $180 per year, while the duo plan, which allows sharing of content on up to two devices, costs $240 yearly. A 6-device access plan, or family plan, is available for $273 annually. The family plan allows groups and family members to choose any available MasterClasses that spark their interests.

If you know someone who is a novice comic or who is interested in learning online, you could offer the gift of knowledge with any of MasterClass’ courses.

People have different opinions about whether or not this comedy course is worth the cost. Some people say that you can find the same information for cheaper in books or free videos. This opinion may be commonly heard, as there is a ton of free content out there.

Others say that the Masterclass helped them become better at comedy. Many people also say that it is a fun class to take and that Steve is a great teacher. All in all, the reviews are pretty mixed, but most people who have taken the class have enjoyed it and found it helpful..

Making people laugh is a challenging task. It requires a lot of talent, practice, timing, and, most importantly, experience. Steve Martin has all of those. And in his MasterClass, he gives an in-depth look into all aspects of being a comedian.

So, is Steve Martin’s MasterClass worth the cost? Absolutely. It is an incredibly comprehensive course for anyone who wants to get into comedy or improve their comedic skills. The course delivers its promise, despite any pushback on the cost and the brand of humor.

The experience you get from taking Steve’s comedy classes will help propel your comedy act, whether you plan to do classic stand-up comedy or you’re planning to break into a career in TV or film.